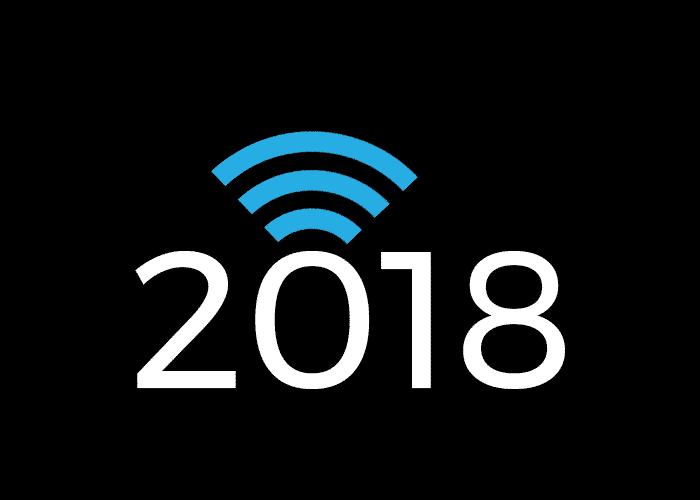 WiFi as a Service and other Trends for 2018

The tinsel is down, the streets are filled with discarded Christmas trees and you’ve finally pieced together what happened on New Year’s Eve. That can only mean one thing: 2018 is here and there’s not a damn thing you can do about it.

But that’s ok, since we here at Stampede are always looking to the future. The past is past and onward and upward.  That’s why we wanted to take this opportunity to showcase some of the trends and events we see happening with WiFi in 2018.

Approved in 2012 and introduced to consumers the next year, 802.11ac is the current wireless standard used throughout the world. For now. Nipping at 802.11ac’s heels is the next breed of wireless standards – 802.11ax. The killer feature behind this latest standard is something called OFDMA, short for Orthogonal Frequency-Division Multiple Access. This this technology allows one access point to to host multiple devices on the same WiFi channel, which will greatly boost the capacity of routers and access points for heavy usage areas like stadiums and public spaces.

But that doesn’t mean you’ve got to trash your current network setup and start shopping. The 802.11ax standard hasn’t been approved by the IEEE yet, so it might not be until 2019 that we see the next generation of WiFi.

IBN started popping up on the radar in 2017 and will start to get mainstream in 2018. IBN utilizes Machine Learning to make networks smarter and faster. Think of IBN as the first step towards Skynet from the Terminator movies. IBN probably won’t make much difference to you if you’re simply offering WiFi to customers in your local coffee shop, but if you’re managing WiFi as part of a larger network topology, you could see IBN making your networks in 2018 more hassle free.

5G, the cellular connectivity standard that follows (naturally) 4G is finally going to get a rollout in 2018. Expect 5G to hold center stage at the Consumer Electronic Show that begins in January. In the United States, both Verizon and AT&T are planning rollouts for selected markets in 2018. However, there is still some confusion surrounding 5G – including exactly WHAT consitutes 5G. There’s concern that unscrupulous providers might just take a gussied up 4G signal and rebrand it as 5G. Still, don’t expect WiFi to be consigned to the dust bin quite yet. There are sill 8 times as many devices connected to WiFi networks than there are to mobile networks.

It’s becoming more and more common to see cities launching free WiFi initiatives and this isn’t going to be stopping any time in 2018. If fact, it’s predicted that by 2020 the number of public WiFi hotspots will grow to 432 million – that’s a sevenfold increase from the 2015 figure of 64 million. It’s predicted that there’s going to be so much free WiFi, in fact, that mobile providers are already starting to grow concerned.

WiFi As a Service

You’ve seen it with software packages like Office365 and Adobe Creative Suite, streaming services like Netflix and Hulu, and now even movies theaters are offering a monthly subscription model for all you can watch flicks. So why not the same thing with WiFi? Introducing WiFi-as-a-Service, the latest entry into the monthly recurring revenue model marketplace. WiFi as a service makes a lot of sense to businesses, who would rather, you know, be running their businesses instead of wrestling with persnickity WiFi controllers and updating passwords. The other advantage to this model is that firmware and other upgrades can be done automatically through the cloud. Which can come in handy the next time there’s an issue like the recent WPA2 breach.

It’s hard to say exactly what’s around the next bend. But that makes high tech kind of exciting, isn’t it? In any case, if you’re ready to step into the future by offering safe and secure WiFi for your business, why not give Stampede a try?